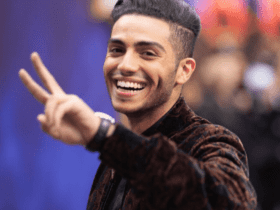 Mena Massoud Travelling Around North America For a Vegan Cookbook

For a six years old what would come to your mind for a Xmas gift.

Well..North West is definitely not an average of 6 years old.

#PressPlay: Christmas is different at #TheWests 😩 How much do y'all think that jacket cost? 👀 📸: @gettyimages

North, who is a huge fan of Michael Jackson received a very special gift from her mother Kim Kardashian and her father Kanye West. The gist is a vintage item, a custom black jacket studded with pearls, crystals, chains and a red band around the arm. Jackson wore this jacket on the 65th birthday of Elizabeth Taylor and a Cannes Film Festival screening of his film ‘Ghost’ 1997.

Kim explained that she had the sleeves tacked so North can wear it and she can untack them once she gets older.

Both parents paid nearly $100,000 for this piece after winning an auction.

Do you think this extravagant gift is age-appropriate?